A close to stable version of Virtuemart 2.0 was released recently, and I was surprised to be a little impressed! Virtuemart has a history of slow development but it looks like that is changing. We will have to wait for the stable version to make any definitive conclusions, but at least the future looks good.

Read on to view a few screenshots of Virtuemart 2.0 and my comments. I didn’t have the time to dive into the code or new features, so this review will focus primarily on interface, usability and… eye candy! Do note, I would not advice using it for an important e-commerce project until its stable. Better to have a look at stable Joomla! 1.7 e-commerce extensions.

Virtuemart 2.0 support for ccExtensions
Off course we will have a stable extension for iDEAL in Virtuemart 2.0, probably within 2 weeks after a stable Virtuemart 2.0 is released (update January 2012: cciDEAL Platform 2.4.0 now released). ccVAOM (Virtuemart PDF invoicing) and ccVMDashboard (Virtuemart latest orders module) will probably be updated later, when our planning allows it.

First of all, lets have a look at the old Virtuemart 1.1 interface. Things that always annoyed me where the menu (on the left), which would never quite work as you wanted it to. It is also very bloated, with a lot of features you never use (some didn’t even work), and the items you do use a lot, like the order overview, was fifth in the list, not first or second as you would expect. The interface was ok, sometimes a bit buggy, but you could live with it.

The first thing you’ll notice in the below screenshot, is that I installed Virtuemart 2.0 in Joomla! 1.7, and it seems to be pretty solid on that Joomla! version. There is also a new user interface, which I actually started liking already.

In the third screenshot, I have added a few notes. From top to bottom: there is a new style for the tabs with bigger buttons which are easier to select, the menu can be open and closed to save screen real estate when you are doing some heavy lifting and Akeeba Release System is now integrated for updates. I especially like the fact that Akeeba Release System is integrated, as it has proven itself a very stable method to update an extension.

The menu now also has a more solid feel and is built logically. Products and Orders & Shoppers are shown as first and second menu item, and Configuration as one of the last. This is a good usability improvement, as the thing you use least, should be positioned further down. 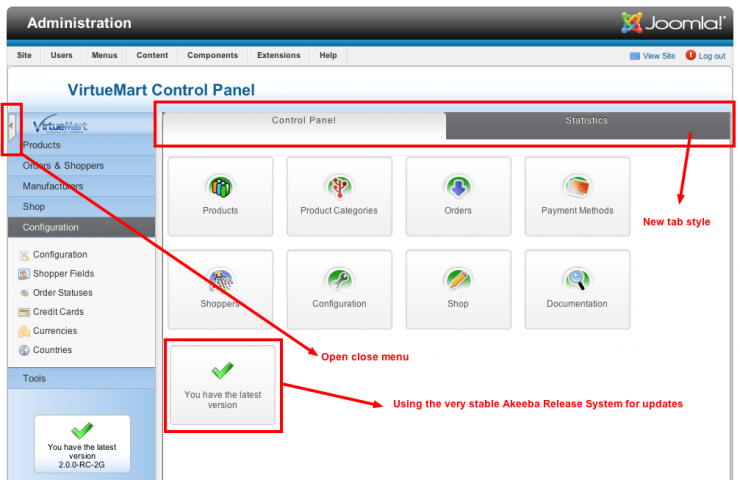 The interface of the product overview and product edit view have also had an overhaul. The interface is now a lot cleaner, and matches the default Joomla! experience a bit more, with for example column ordering. The location of different functions (like Parent and child products) has also changed. This will need some getting used to, but it’s probably worth it in the long run, as I have the feeling the current layout is easier to use.

In the product edit view you can also see a few new features, like “internal note” and a tab “Custom fields”. 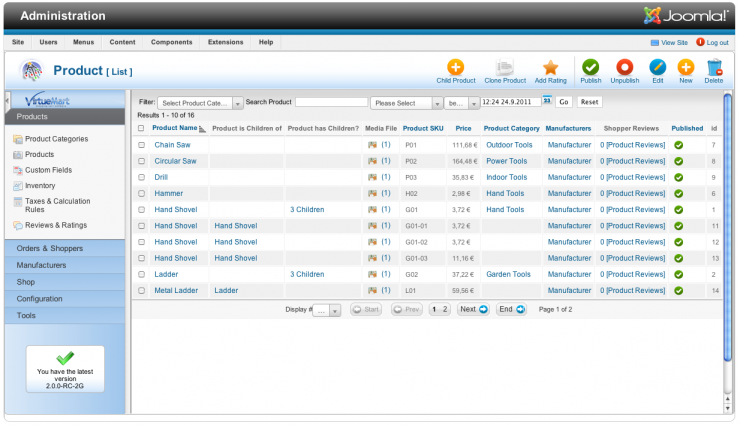 Good news for all you front end webdevelopers! It looks like you will have do do less basic HTML/CSS work when deploying Virtuemart! The new default site template is a lot better then the previous one, and should look good in most websites. Also notice the very big and green buy now button, which will definitely improve conversion compared to the previous one. In the last screenshot, you see that the AJAX “add to cart” pop up now also has a more minimalistic design. 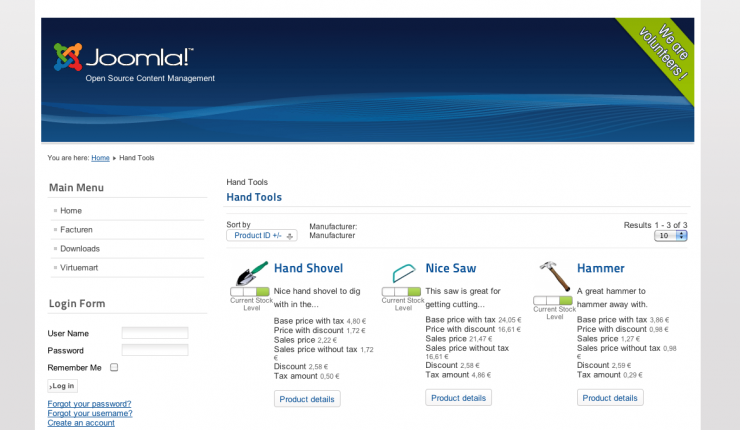 In conclusion… wow! The new interface and site template look like a big improvement, bringing Virtuemart up to speed with other (newer) Joomla! e-commerce extensions. Let’s hope the stable version is indeed “stable” and matches the same quality as the eye candy interface!