In what might be the best web development news of 2012, Joomla! 3.0 was released last September. The massive undertaking of Joomla extension developers has begun to convert their extensions to this new version. We have also started updating our Joomla! extensions and hope to release beta versions soon. Read on to learn more about the status of our extensions and Joomla! 3.0.

What’s so great about Joomla! 3 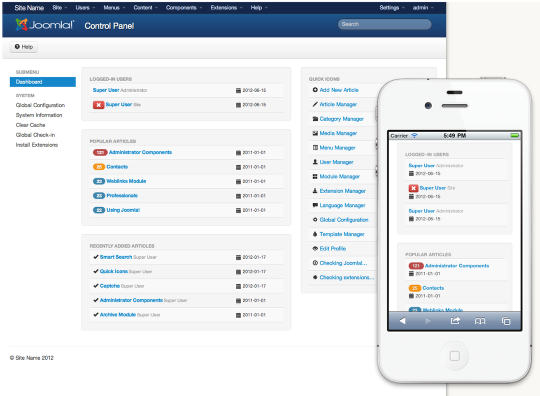 In my opinion the greatest improvement to the new Joomla! version is the completely new administrator interface and the default support for mobile devices with the inclusion of the Twitter Bootstrap framework. Bootstrap is going to save web developers a lot of time. Extension developers are now encouraged to use the default styles of Bootstrap in their extensions. If they do (we will!) it means all extensions have the same CSS styles for fields, buttons etc. Therefor a default install of Joomla! will look alot better out of the box. And because, for example, all buttons are called “.button’ you only have to change a CSS value once in a CSS override file to change it for all extensions.

The most important things to know about Joomla! 3 are: it supports mobile devices in the administrator and site, it’s for early adopters (developers and experienced users), and if you use Joomla! 2.5 there is no need to update/migrate until 2014!

TIP: migrate from Joomla! 1.5 and 2.5 to Joomla! 3 with SP Upgrade if your template and extensions are compatible!

We have started converting our extensions to support both Joomla! 2.5 and 3 (and are removing support for Joomla! 1.5). The below table will be updated regularly. If your order is active when we have completed an extension, you can download it for free. If you purchase one of our Joomla! extensions today, you will definitely get the Joomla! 3 updates for free when they become available.

A few of our friends have also started or even finished adding support for Joomla! 3.0 to their extensions. Have a look at the administrator and other Joomla! extensions from NoNumber, the professional backup and security extensions from Akeeba, Cookie Confirm (for EU cookie law) and the award winning ACLManager.