Joomla! 3.4 was released in February and it’s a solid update! One of the improvements in the new version is what people like to call “Extension beta testing“. In my extensions you might know this as the “Minimum stability” dropdown in the configuration. I’ve made a little video to show you what the new dropdown is all about, and why it is super smart to set it up.

You probably already know you can update Joomla! to a new version from the administrator (no more FTP, yay!) via Components > Joomla! Update. But… you can also update extensions (that support this) from the Joomla! administrator via Extensions > Extension Manager > Update. If an extension supports the built-in extensions update, you don’t have to actually visit the above page, because Joomla! will show you there is an update directly after logging in, right there in the dashboard (see video).

Now, in Joomla! 3.4 you can set the minimum stability you want for an extension to be available via Extensions > Extension Manager > Update > Options > Minimum Stability. I’ll show you in the below video.

As you can see in this video:

Why is this a great idea?

If a site is extremely important, you can tell Joomla! to not inform you about beta versions of the extension’s you use, because you don’t want any software that is not stable on your site. But for a site with less visitors, or just because you like a little challenge, you can set the minimum stability to “Development” or “Beta”, and get ALL versions an extension developer releases, even experimental ones.

You might have noticed it already: the latest versions of my extensions also support the core Joomla! updater. 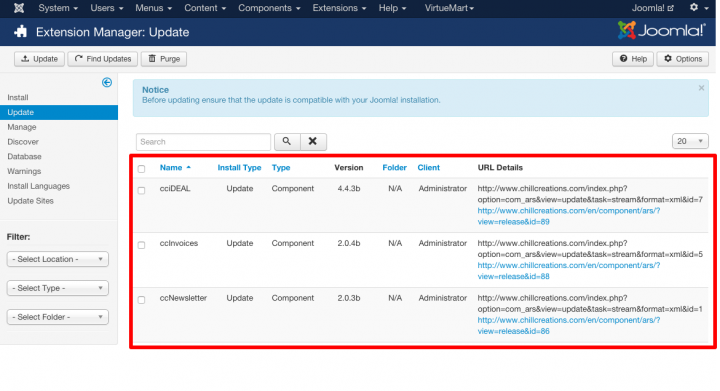 Older versions my extensions used different software for updates (Live Update) because that already supported commercial extensions (with a download key) and a minimum stability setting. Now that the Joomla! core updater does this by default I added support for it in ccNewsletter, cciDEAL and ccInvoices. I will remove the older Live Update from my extensions completely, in one of the next, err.. updates.

If you did not update recently, you will not see my extensions in the Extension Manager > Update yet. You need to update to the recent versions before the new versions after that become available in the Joomla! Extensions Manager.

Don’t think about that update-ception too much. Just update via one of the two methods explained below, and after that it’s all good 🙂